Following all the responses received from instructors this year a very strong short list of two candidates emerged. Paul and Ann Marie Walton, after a detailed review of the information provided by their instructors have awarded this years title to Cian Hogan of ASKI.

Cian, a 16 year old 1st Dan from Ireland, has provided an inspiration to many youngsters through his diligent training and general attitude in the dojo. His willingness to help other juniors within the club, his encouragement and assistance with there training were all highlighted by Sensei Michael J Hogan (no relation!). 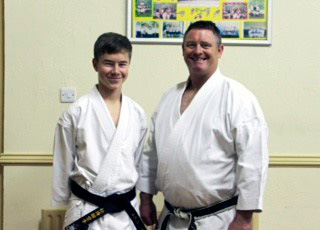 Children have returned to karate as a result of Cian training them and Michael highlighting his achievements and attitude comments that, "Children want to be like him when they grow up". A fitting summary for the recipient of this award.

The photograph show Sensei Hogan with Cian announcing the award at the dojo on the 17 December. 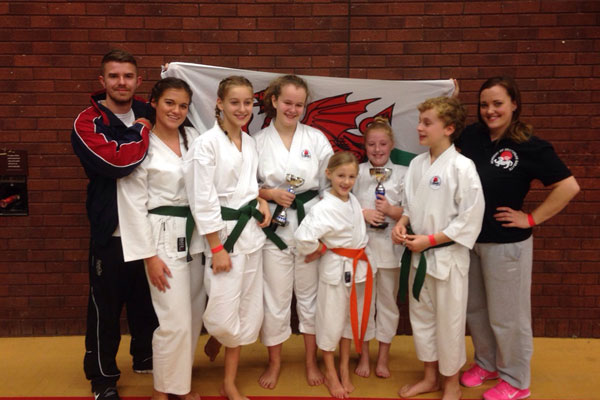 Academy of Shotokan Karate Ireland (ASKI) would like to congratulate cadet members Cian Hogan (1st dan), Padraig Hassett (3rd kyu), and junior member Michelle Hurley (7th kyu) on their fruitful efforts this year in competitions both at home and abroad.

Well done to the three for training with such determination while also training for hurling and camogie matches in Clare. Their dedication to training has made them fine role models and sempai for other fledgling Karate-ka in the association. Here is a quick review of the past year:

Michelle Hurley has been punching above her weight in the junior section of Karate competitions at home and abroad. The Spring started with a bang with Michelle bringing home a bronze medal from the 10th Scottish Open Championships in April. Back at home, Michelle won a gold medal in girls' kumite at the Budo Nord Open 2014 in Tallaght. In the Autumn, she won gold (Kata) and silver (Kumite) medals at the ONAKAI National Junior Championships in September (Ballinasloe) and October (Tallaght) respectively. Shortly after she was selected for the ONAKAI Junior Girls Kumite developmental squad that travelled to Glasgow in Scotland for the British International Open (British Karate Federation).

Padraig Hassett has done exceedingly well in the past year with an unprecedented two full kyu gradings from our chief instructor Sensei Dave Hazard (7th dan); Earlier this year, Padraig won a bronze medal in Kata for his performance at the Budo Nord Open.

Academy of Shotokan Karate Ireland (ASKI) would like to congratulate cadet members Cian Hogan (1st dan), Padraig Hassett (3rd kyu), and junior member Michelle Hurley (7th kyu) on their fruitful efforts this year in competitions both at home and abroad.

Cian Hogan continues his winning performances with gold medals from the Budo Nord Open (under 18s Kata) in May, and ONAKAI National Championships 2014 (Tallaght)in April. Cian held on to his title as National Champion for the 2nd year running in the cadets Kata competition with his Dojo junior and training partner Padraig Hassett following closely behind in second place performing their signature Jion and Gankaku Kata. Cian and Padraig are working hard with their Sensei, Michael J. Hogan (5th dan, ASKI) to produce new aces up their sleeves as they get closer to the Seniors' categories.

ASKI are proud of our cadets/junior Cian Hogan (1st dan), Padraig Hassett (3rd kyu), and Michelle Hurley (7th kyu) who travelled over to Scotland with the ONAKAI Irish Karate Squad. This has been a great experience for them to train and fight alongside their national squad members from across the country, and to see how things are done across the pond gave greater perspective in setting even higher goals and benchmarks. 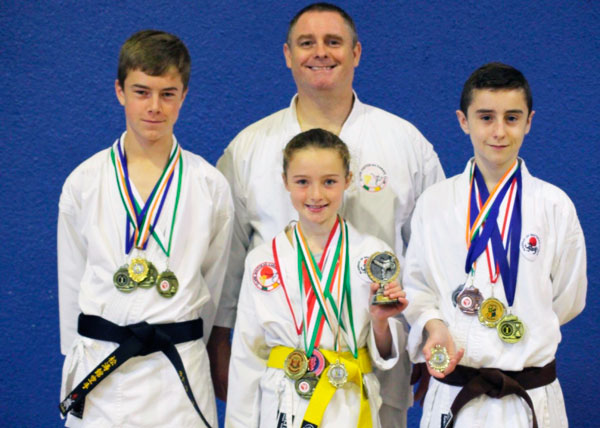 After Matthew Walton died in 2004 at the age of 20, the whole Walton family felt very proud and humbledby an anonymous donation of a shield in his memory to be presented to the most improved junior competitor at the ASK championships. The annual championships became unviable a number of years ago due to dwindling competitor numbers and the shield has remained in the North East of England since then. 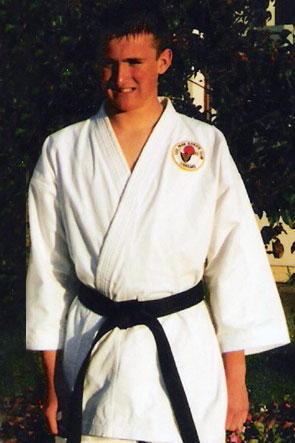 Following a short presentation at the ASK Instructors class in July 2014 it was agreed by all present that the shield should now be awarded to the most improved ASK junior karateka of the year. Any young karateka under 20 years old on the 31 December and of a minimum grade of 3rd Kyu is eligible. This will provide recognition to anyone nominated by their instructors as the first step to deciding on an eventual winner and will provide a wonderful continuation to the trophy in Matt's memory.

Nominations by club instructors will be objectively assessed by Paul and Ann Marie Walton against a set of 5 criteria. The criteria are aimed at highlighting the wide range of attributes that go to make up an excellent all round karateka and in order of priority these are; Training record, Asset to dojo, Positive role model, Courses outside parent dojo, and Competition Record.

If a paper version is required please contact Paul Walton on 01803 858733 or by e-mail at [email protected]. Completed forms should be returned by 30 November to Paul Walton by e-mail or by post to The Bays, 16 Higher Ranscombe Road, Brixham, Devon. TQ5 9HF.

On Sunday 27th July 2014 at the 'The Dojo' in Nottingham, senior club instructors from around the United Kingdom joined Sensei Hazard 7th Dan for the annual ASK instructors class. The content of 2014's intimate three-hour training session consisted of close examination being given to the transitions between stances, punches and blocks, the introduction of a specially devised ASK fighting sequence and the study of 'Kosa-Dachi' in kata performance and application. Sensei Hazard was assisted on the instructors class by senior association 7th Dans - Jeff Westgarth and Jess Lavender.

Cian Hogan, Padraig Hassett and Michelle Hurley were part of the Irish team that took part in the Scottish International Open 2014, held in Edinburgh, Scotland. Cian, Michelle and Padraig did very well in the kata, reaching the 3rd round and were unlucky not to get in to the repercharge for the medals round. The team did well in the Kumite and Michelle took 3rd place in the Girls Kumite 7-9 years.

The 2014 ONAKAI National Senior Karate Championships was held on the 13th of April 2014. Academy of Shotokan Karate Ireland (ASKI) would like to say well done to everybody who competed at this year's championships and congratulations to all the medal winners. The ASKI's own cadets, Cian Hogan, won a Gold in Kata holding on to his title for the last two years and Padraic Hassett, Silver in Kata in the 14-15 years category. 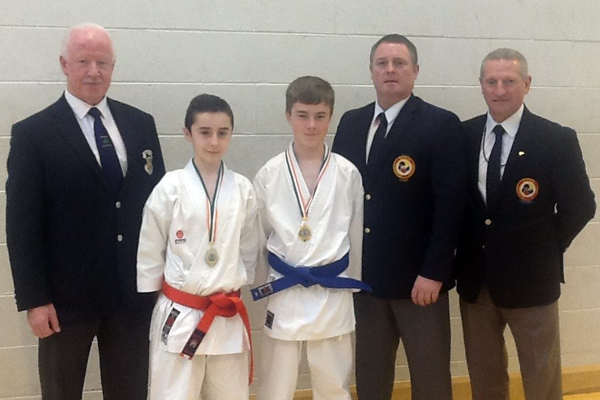 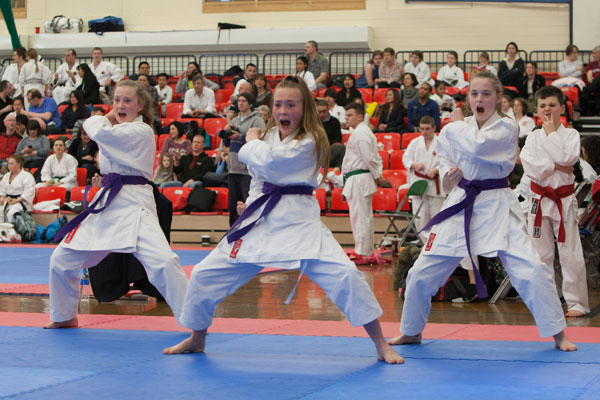 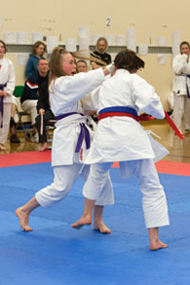 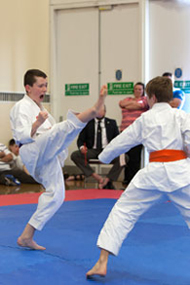 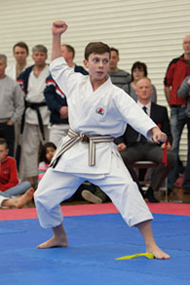 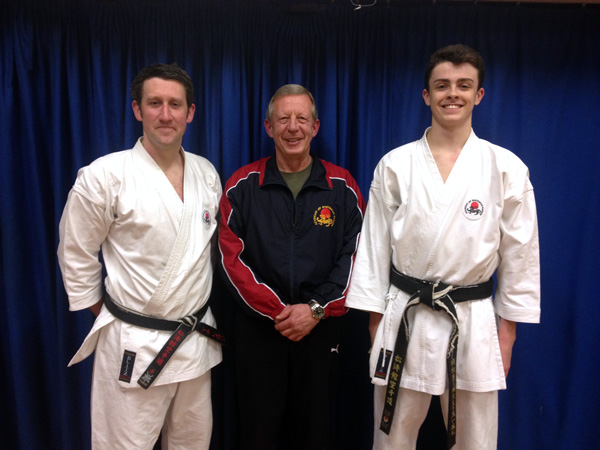